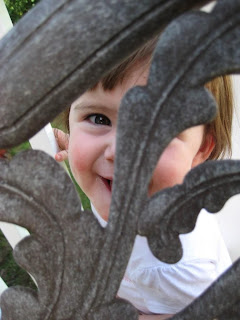 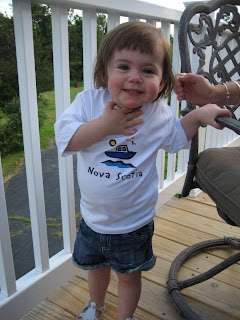 I am in chaotic chaos-ridden chaos-ity with my show right now. So instead of actually blogging like a real blogger would, I would like to share these two FRAKKIN CUTE pics of Jane. I didn't even take them; my friend Todd did at our Fourth of July extravaganza. See how patriotic Jane is, in her Nova Scotia t-shirt, given to her by Todd and her Canadianfather, Alan. (Alan is Jane's Canadianfather because she is 1/something French Canadian, and Alan is Canadian by way of his motherland, Nova Scotia. So he is in charge of teaching her all the wonderful things about Canada. In fact, the guests at our party played an impromptu game of "Better Know a Canadian" starring Alan, where they berated him with questions like "are you ever going to become an American citizen" and "when you came to American and had ham for the first time, were you surprised?")

So, um, anyway, here are some pics. I promise to be less scatterbrained in a couple of weeks. (don't hold your breath.) (as if you were.)

So cute! And that reminds me I never emailed you my pics of Jane. Will do that now.

You forgot to mention the hand-raising. My favorite part of the patriotic, 4th of July, Get-to-know-a-Canadian game.