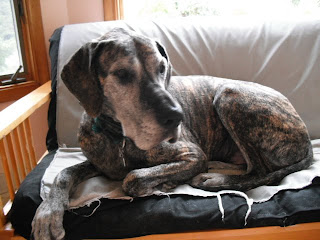 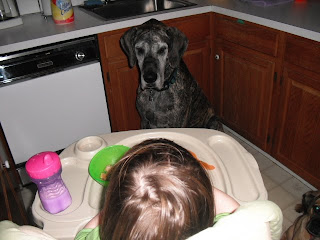 By popular request, here is the latest Junior update.
Junior, at this exact moment, is acting like a complete assclown, galloping around the living room, jumping, attacking Jimmy, and generally acting like he did not have major stomach surgery a month ago. Really, he seems to have a whole new lease on life. Sure, it was a lease that cost $5K, but whatever.
As you can see from the picture above, the one where he is staring down Jane's dinner, his appetite is back. Basically it was back in just a few days, but I've been very careful with the amounts I'm feeding him. I feed him much less, but several times throughout the day, instead of just one big feed.
Three weeks after his surgery, we ran into a bit of an issue. We had gone to a birthday party for a neighbor's kid, and I had to leave early. Greg brought home two cupcakes for me (because I heart cupcakes), and left them on the counter, which is a reasonable place to put food. Not when you have a Great Dane, though. Junior swiped those cupcakes off the counter so that by the time I got home, the only evidence was a stray Elmo plate that Jimmy was carrying around.
Now, we would not normally worry about Junior eating two full cupcakes. Sure, the average dog owner might, but we stopped worrying about such things years ago. HOWEVER, stuck in the cupcakes were these plastic bees with sharp pointy parts so they would stay stuck in the cupcakes. Sure enough, there was no sign of the bees anywhere.
We realized that Junior had ingested the sharp plastic bees about two hours after it happened, and really, it was a horrifying realization. Not so much the fact that he had consumed plastic - again, this had happened many times before - but the fact that since it was so soon after his surgery, we would have to call the emergency vet AGAIN (because OF COURSE it was after hours) and explain what happened. A little more than slightly embarrassing, for sure.
Greg did the deed, and the vet immediately knew who Junior was. I mean, why not? We're funding their winter holidays. He said that Junior was most likely fine, and to watch him. Which we did. And thankfully, he was fine.
So there's your Junior update. Back to being the ass he always was, and boy, are we happy for it.
Posted by Amanda at 5:52 PM

Well it's about time! So glad to hear he's back to normal.

Instead of stitching him up, couldn't they have sewn in a zipper for the next time he eats a shoe or a cookie sheet or whatever else he might get into? That would be a lot easier.

Yep, I second the zipper idea. A couple of years ago my very intelligent dog, Bailey, swallowed a lacross ball. And wouldnt you know, 3 weeks after having it surgically removed, she swallowed a super ball?! Yep, that required surgery as well.

What is it with dogs and swallowing things? My mom's dog swallowed a long strip of fabric that she chewed off of a blanket and had to have emergency surgery on CHRISTMAS so that it wouldn't get all tangled up in her intestines. Seriously?

I kind of love junior because he's such a beast. And also because his name is Junior.