my kid is freakin' cool

So, today was one of those truly special days at daycare when Jane only takes one nap. If by "special" I mean "horrible," because that means the countdown to bedtime will be slow, tear-soaked and drama-filled. Indeed, that's how this evening was progressing. I tried to entertain Jane with her toys and books, but she wasn't having it. So I took her on a long walk, during which she fell asleep. Imagine her delight (and mine) when I took her out of her stroller with a half hour to go until bedtime. Sadness! Misery! Wailing! Until....

I have a magic trick. When the shit really hits the fan, I go to my special saved DVR recording that is guaranteed to work. I was afraid that tonight it would fail, because, o, woe was her. But I had to give it a shot. She was crying and generally lamenting her very existence until she heard this blog's favorite Lin-Manuel Miranda kick off In the Heights' Tony performance with "Lights up on Washington Heights up at the break of day...."

She turns and looks at me like, "Holy crap, Mom! Look who's here!" She whips her head back to the TV just to make sure, then looks back at me with a gigantic smile, her legs wiggling, her body bouncing. She's been happy ever since.

Everyone who meets Jane comments how she looks nothing like me, and everything like Greg. And it's true. But she's got some me in her. She's a theater dork in the making.
Posted by Amanda at 6:46 PM 3 comments:

wipe those tears away

OK, OK, I've been told to stop making everyone cry with my sappy baby posts. There has been a request for dog pics. You want 'em, you got 'em! 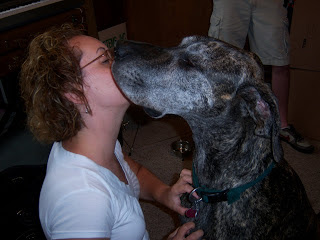 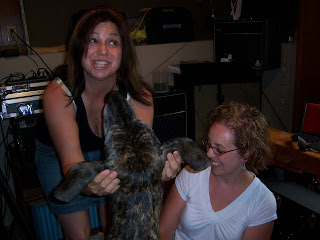 My show opens tonight. The last two weeks have been particularly grueling with many nights of rehearsals, stomach bug in the house, shitty vacation, busy at work, blah diddy blah blah blah. The good news is - the show is ready. The BEST news is - Jane's mole was benign. THANK GOD!!
When I have more time, remind me to tell you about the bat that invaded rehearsal on Wednesday night. To recap: July 23, 2007 at 7:27 p.m. I was having Jane. July 23, 2008 at 7:27 p.m. I was ducking from a crazy, swooping bat! Oh, what a year it's been.

If you're looking for my usual snarky posts, please skip this. 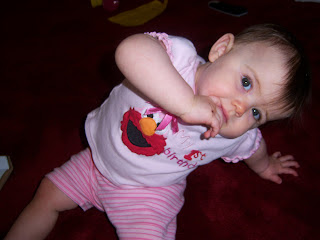 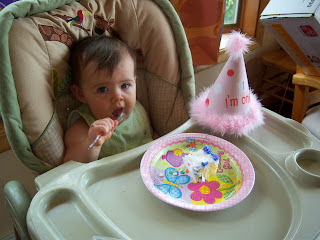 ETA: Love the special birthday banner, Lisa! Thank you so much! Jane approves. 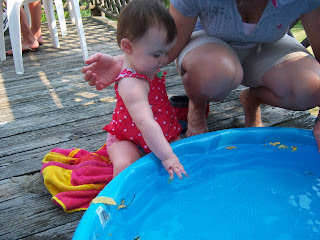 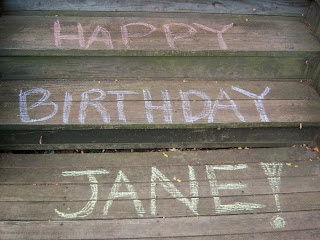 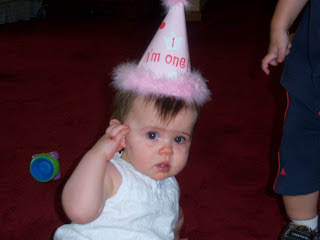 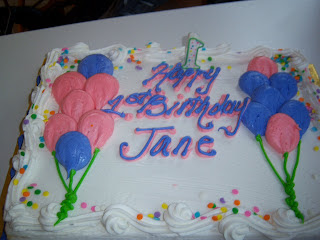 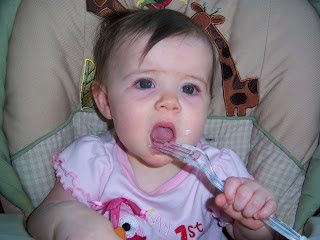 another opening, another show

Posted by Amanda at 9:25 AM No comments:

wish you were here!

Well...not really. Because if you were here, you'd have to listen to me complain about how I was completely laid out for the past three days with a wicked stomach bug. I should have known something was wrong when I went out for lunch in the park on Friday and fell asleep on a bench. After deciding I didn't want to eat anything. Yeah, those should have been two very strong signals that something was up.

So, welcome to my vacation! I'm doing it up in true Amanda style by being sick and complaining! I'm still not completely recovered yet and haven't eaten anything that isn't strictly a bread-style product since Thursday. And I've lost five pounds! No lie. FIVE! Shane, you know what that means - ONE POUND TO GO!(Until I gain it all back.)

I was supposed to get all sorts of stuff done this weekend. Friday night, I was supposed to go out to dinner with Todd and then go see Alan in STAR TREK: THE KLINGTASTIC MUSICAL, but instead I was in bed by 8. (Oh yeah, did I mention that Jane was sent home from daycare on Friday with a fever? Yeah.) Saturday I was supposed to go out and buy Jane an outfit for her big one-year photo session on Tuesday, and buy birthday presents for Heather's kids who were having a party on Sunday, and a bunch of other stuff...but I didn't do any of that. I will be polite and not tell you what I did do. Yesterday I managed to leave the house to go to Target and buy the birthday presents, and I did haul myself over to the party for a while before going to rehearsal (yes, I am STUPID, but the show is in less than two weeks, people!). But it was a pretty craptacular weekend overall.

And now it's Monday. Today I did go to the mall and get Jane a dress for tomorrow's big shoot (it is AMAZING how hard it is to find a cute, simple white dress this time of year. If I were looking for her winter clothes now, I'd be all set. But summer is SO OVAH, according to every baby clothing store in the region.) Tonight I have rehearsal. I have rehearsal every night this week, as well as next week. In two weeks, the whole show will be a distant memory. It is frightening how much has to be done between now and then. Can't believe how fast this summer is flying by.

Or maybe it just seems to be flying by because I'm in a cold medicine/stomach bug/sleep-deprived haze all the time.

I pray that any further vacation updates are far more, well, vacation-y than this one.

PS Thanks for Lisa for pulling me out of my pity party with that awesome new banner!
Posted by Amanda at 4:04 PM 2 comments:

I think I heard something about this somewhere

Jane's home away from home is the Chickadee room at her daycare. This room is split in half; one side is for babies 6 weeks to 1 year, the other side is for babies and toddlers ages 1 to 2 years. As you know, Jane started daycare when she was 13 weeks old, and just recently moved over to the more grown-up side of the Chickadee room, where I can only imagine they debate politics and the economy all day.

A woman, who I will call ML, is the head teacher of this room. She is probably in her late 40s, and has been working in the daycare biz for a long time. In fact, she and her second in command, who I will call A, have been working together for eight years. A is younger, in her mid-20s. Anyway, ML has been a really great resource to us in this stumbling, bumbling first year of parenthood, and while she surely says this to all of the parents, she claims to us that Jane is her favorite. And I eat it right up. ML has been Jane's main influence, aside from me and Greg, in her 11.5 months of life.

And now she's leaving. As I was dropping Jane off this morning, ML let me know that her last week is next week. And as much as I complain about daycare, having to bring Jane there, how much I wish I was a millionaire so I could stay home all day with her, how she's sick all the time, the hassle, the bills - I got all choked up. My eyes filled with tears and I got a big lump in my throat the second she told me the news. I could tell she was very upset too - she is leaving to take care of some family issues, and she told me how much she was going to miss Jane.

Jane loves ML. Every time I drop her off, she gets a big grin on her face as soon as she sees ML. This morning she was practically lurching out of my arms to go to ML. And sure, she's not old enough to ponder what happened to the nice lady who took care of her every day, but her daily reaction to ML makes me so grateful that ML has so obviously done such a wonderful job taking care of my daughter.

Don't get me wrong, I am happy with all of the primary teachers in Jane's room, and the rumor is that A will take over ML's position, which makes me happy for her. But I guess today I realized how much I depend on knowing that Jane is with people who genuinely care about her well-being. And ML is most definitely one of those people.
Posted by Amanda at 8:45 PM 1 comment: