Well, I am clearly having a case of the old writer’s block over here. I hate that shit. There are a few things I’d love to hash out on the blog, but it’s not really public consumption stuff. So what to say, what to say…I guess the only thing to do is approach this like I would do a writing project at work. My first step, always, is bullet points!
Today we’ll keep it light (which is what I choose to do instead of glopping on about shit I don’t want to talk about anymore) (like the $500 someone stole from my checking account at an ATM with my pin number and I won’t get it back until the bank straightens it all out OMG I NEED MY MONEY) (and how I’m PMS’ing hardcore and sad and think I’m simultaneously going through perimenopause) (not really) (but maybe) (TMI?).
With that, I give you the things I most love about early fall:
Do you love early fall? Why?

weekend update, and other random things.

Hello, hello. Sooo happy it’s Friday. Now that Jane’s in school the weekdays are so crazy – I was out doing things Monday (dance class), Tuesday (PTO meeting), and Wednesday (theater meeting) nights, and on Thursday my old friend acid reflux decided to rear its ugly head. Gross.
I’m co-directing a fundraiser/variety show for my theater group, and a lot of this week has been about solidifying a cast. We had to reschedule the show from October to December, but I think things are in pretty decent shape, for the time being. This was supposed to be an easy project – not so much. Not so much AT ALL.
I actually liked my first PTO meeting! I’m such a nerdy joiner. I’m pretty sure I volunteered to be the public liaison for the PTO. I figure the only way I’ll know what is going on at Jane’s school is to get involved. And she’s too young to be embarrassed by me – for now, anyway.
Have you been watching any of the new shows this fall? My tally right now:
Shows I love: The New Normal (and I especially love love love Andrew Rannells, who I saw inThe Book of Mormon)
Shows I like, and will continue watching for now: The Mindy Project, Go On
Shows that get one more watch and if it doesn’t get better, DELETE: Revolution
Shows I couldn’t make it 10 minutes through: Men with Kids. Or Guys with Kids? Whatever it’s called. Sucked. So hard.
So this weekend we’re shaking it up by not being at the boat the entire time. We just got home from the back to school picnic at Jane’s school. Tomorrow night we have a 30th birthday party to go to for a friend of mine. Sunday is my birthday – and yes, I believe we’ll be at the boat. Hoping to take a trip over here. And Greg’s making me a cake. And I plan to eat an indecent amount of it.
I hope you have a magnificent weekend, all y’all!
PS My friend Bryan, who is a theater student at NYU, has started up a fancy blog (which I named). Please go check out AusterMania.
Posted by Amanda at 7:40 PM 2 comments:

scenes from the weekend. 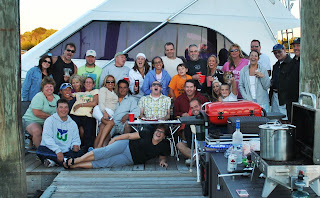 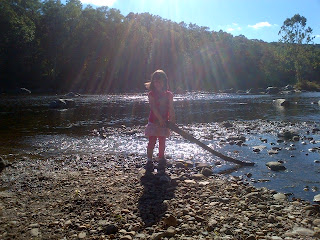 We spent the majority of our time this weekend at the boat. This big group picture is from the Dock 10 end of summer party - you'll see me in the middle wearing a purple sweatshirt and looking particularly hottt in an unshowered sort of way. Jane and I went to one of her peeps' birthday party, and took a little detour to check out the Farmington River for a few minutes (second picture), until a random dude approached us and I realized I had set us up to be murdered in the wilderness. Things didn't get that exciting though; he gave Jane a cool rock he found and left. But don't think I thought, "excellent, he gave us a weapon" when he handed her the stone. (I read too many murder mysteries.)
Posted by Amanda at 2:33 PM 1 comment: 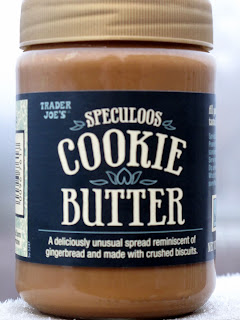 I know you guys don't come here for food recs, and I don't even know if this counts as actual food, but my friend Todd gave me a jar of Trader Joe's Cookie Butter, and I swear to God I can't even describe its amazingness. This week has been  - chaotic - and I have visited that jar for a scoop of delicious happiness more than a few times. In conclusion, YOU MUST TRY THIS. For serious.

As you can see, I've fallen off the 17 Day Diet wagon a bit. Some things are just worth it.
Posted by Amanda at 5:41 PM 4 comments:

So, as most of you know, I lost a battle with a broken fluorescent lightbulb this weekend while cleaning out my theater's rehearsal space, and ended up in the ER with seven stitches, a splint, and my right hand wrapped in all the gauze the hospital had in stock on Saturday morning. So that was fun.

Sunday was as much nicer day. We took the boat to Greenport, Long Island, and had a nice afternoon there with my in-laws. Some pictures, for your pleasure. 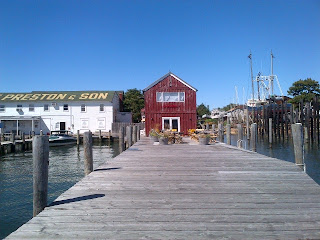 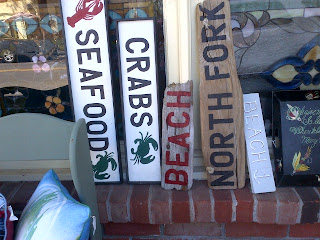 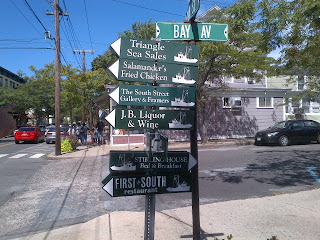 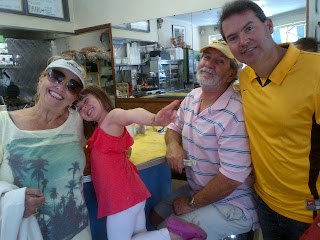 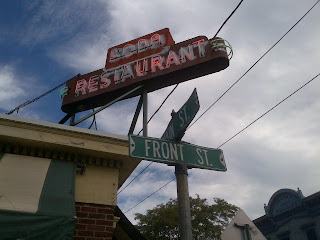 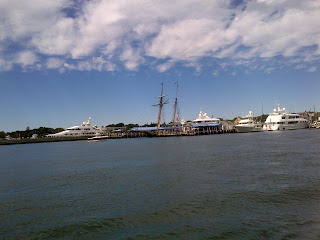 here's to the freakin' weekend. 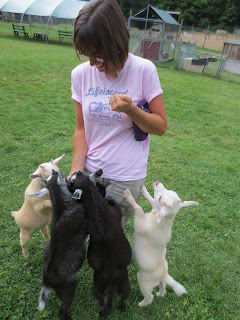 With apologies to my Facebook friends who have already seen this photo, I wanted to post it here too, because seriously, what a happy moment. Look at those baby goats! This pic was taken by my friend Todd at a farm we went to last weekend.

What a whirlwind week this has been, guys. Kindergarten transition seems to be going fairly well. Jane is being shy with the other kids, so of course my fear is that she'll have no friends (I always like to give myself something big and tragic to worry about to ensure insomnia and stomachaches). But overall she is really doing great. Participating in class, likes her teacher, getting on the bus like it's no big deal...we're lucky (tap wood).

In the meantime I've flipped my work hours to afternoons, so I'm going into work at noon instead of 8:30. Now the mornings are busy with Jane, chores and cleaning, and it's weird to be going to work AFTER I do all of that business, since I got so used to doing my life stuff during the afternoons when I went part-time last year. In addition, next week brings the beginning of Jane's dance classes, two nights of auditions for the variety show I'm co-directing this month, curriculum night at Jane's school....so yeah. Summer's over.

Truth? I love being busy. I love having a crazy schedule. I don't like having excessive free time. This is something major I've learned about myself over the pst year. I feed on insanity. Does this mean I'm insane? Probably.

I hope you all have a fantastic weekend!

back to school - kindergarten edition

I have been so emotional over the past week.
And even though I am an emotional person (WHAM! SHOCKER!), I was actually surprised by this.
Way back five years ago, when I first sent Jane to daycare (and struggled mightily), I thought that sending her off to kindergarten would be a snap. That I would be used to sending her somewhere for the day, and she would be used to school, other kids, teachers and the classroom setting. No big deal.
That was before I realized what an integral part of our lives her daycare would become. She made some great friends, I made some great friends (hello Friday night moms’ happy hour!), she formed super-tight bonds with some amazing teachers, and along the way learned her letters, her numbers, discovered her love of drawing, learned countless songs, learned how to fight and negotiate with other kids (important for an only child!), and evolved into a magically sassy and delicious five-year-old.
On her last day of preschool, I felt very disoriented. It sounds so cliché, but seriously – where did the time go, you guys? No, really? How did five years pass so quickly? I know every parent on earth says the same thing, but it’s true. I have no idea how we got to the moment we were at this morning, waiting for the big yellow bus to show up at the corner of our street.
My fears for her are countless. Will she make friends? Will kids pick on her, or bully her? Will she cry? Will she know where to go and what to do? Will she love her teacher? Will she learn easily, or will she struggle? Will she… Will she… Will she….?
I had a vision of how this morning was going to go. Jane has always had difficulty with transitions, and every year at daycare, when she moved into the next room, she cried and cried. Drop-offs were a nightmare. She doesn’t like unfamiliar situations – and that was at the SAME SCHOOL, with the SAME KIDS, in the SAME BUILDING. This morning required her to go, alone, onto a big bus, off to a place that, sure, she has visited, but didn’t really know.
She told me many times over the past few days how nervous she was, especially about getting on the bus. She would get teary talking about it. She would mention how none of the kids in her class will know her name. How she doesn’t WANT to go to kindergarten. I had an image of her crying, face pressed up against the window on the bus as it pulled away. I was certain this was how it was going to go.
Because she is in afternoon kindergarten, her bus wasn’t set to come until 11:23. This morning felt endless. She, Greg and I got to the bus stop about 15 minutes early, and then the bus was about 10 minutes late, so we were standing there for a long time. Jane, at this point, was PSYCHED. I, at this point, had an incredibly upset stomach, a giant lump in my throat, and extreme anxiety that once we saw that bus, she would dissolve into tears.
But when it came down the street, she was ready. She got on that bus like a CHAMP. Waved goodbye; no tears. None for her, anyway. I held mine back until she left.
***
She had an awesome day. To my great relief, she knows someone in her class - there is a set of twins from her daycare that is going to her school, and one of them is in her class, and she mentioned another friend that she made. The best part of her day, of course, was snack. 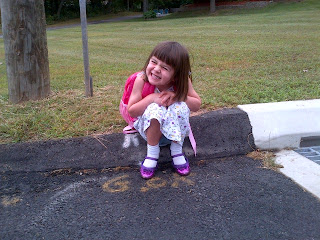 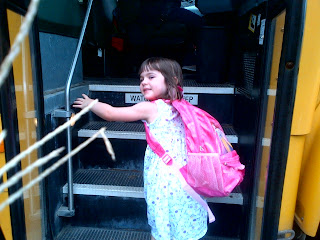 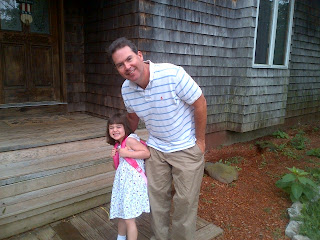 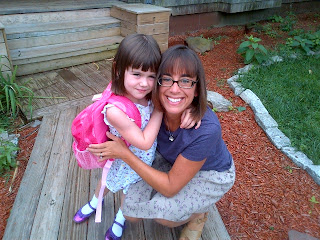