at least now she won't be stuck in limbo 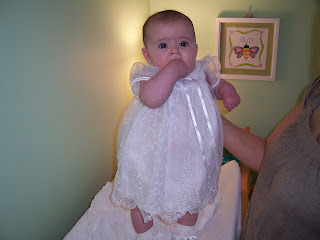 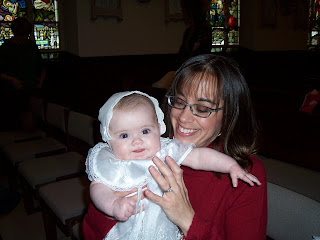 Jane's baptism was yesterday. Usually, when there is a baptism at at Catholic church (not sure if it's the same elsewhere too), there are several babies. For whatever reason, Jane was the only one yesterday, so the service was a little more personalized. It was really, really nice, I must say. It was one of the first times I really felt like a parent! The deacon kind of discounted all of the reasons babies used to be baptised (see the aforementioned "limbo") and gave a more modern talk. Afterwards, we had about 30 people over for lunch and festivities. It has been a long week of preparation for this event - so now I feel like my vacation is truly beginning - with a whole two days left! Argh! I will never plan a vacation around a big event that is going to take place at my house, because, no matter how much I try not to, I will obsess over getting everything ready and stress myself out more than if I were at work!

Anyway, whether or not you are a fan of the whole "church" and "baptism" thing, you must admit Jane looked quite cute, no? Such a girlie girl!
Posted by Amanda at 8:42 AM 2 comments:

merry, merry, why ya (stomach) buggin'? 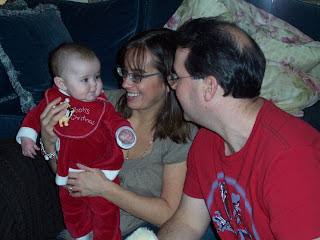 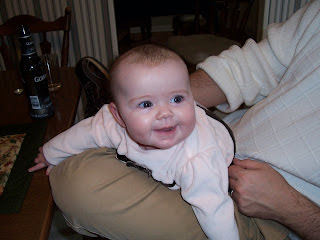 Well, as to be expected, I got sick on Christmas Eve and have felt miserable since. It started as a yucky stomach bug and has morphed into a crappy cold. Nevertheless, we had a nice, albeit extremely exhausting, holiday. Now we're in baptism-preparation mode. All I want to do is crawl under the covers.
Posted by Amanda at 7:25 PM 5 comments: 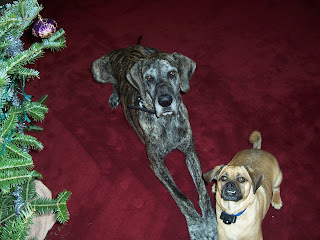 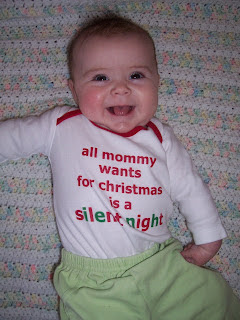 Today is Jane's fifth monthiversary! Can you believe it? Well, maybe you can, but I can't. I cannot believe she's already five months old. These past five months have been a blur of no sleep, lots of tears (on everyone's part), lots of joy, and lot of crash-coursing in parenting. I'm a freakin' mom! I think I'm just now realizing this. We just went to church (yes, church!) and she was quite the belle of the ball at the 7:30 mass. She's getting baptized next Sunday so I thought it would be a good idea to show our faces around there for the past few weeks. It's actually been pretty fun. Of course, when the priest came up to her to say hello before mass began, her mouth formed a perfect frown - a completely upside-down smile - and I thought she was going to lose it, but she didn't, thankfully. He has a very deep voice and I think she was a little shocked.

Speaking of shocking, Christmas is two days away! I am so proud of myself, because I'm done with shopping and 99% done with wrapping. I feel like I must have forgotten someone, because it can't be this easy. Of course, a couple of my gifts are sorta IOU-ish, so maybe that's what made it easier.

So. Merry merry, everyone. I hope your holidays are just what you want them to be - whether quiet and private, loud and obnoxious, or somewhere in between. (I think mine might be the second option.) See ya on the flip side!
Posted by Amanda at 8:46 AM 5 comments:

So, I have today off of work. I finished up my Christmas shopping, baked some cookies for a party tonight, hung out with the kid. Stuff like that. So I let the dogs out at some point this afternoon, and proceeded to continue playing with Jane on the floor and half-watching a documentary about women and HIV. Good times. So I realize, after some time, that the dogs haven't burst in with their usual "HEY! It's Tuesday afternoon everybody!!" excitement. So I look out the front door. No dogs. I call for them. No dogs. I look out the back window. No dogs. I walk around the house (in the snow, in my pj pants and t-shirt). No dogs.

I (pardon my French) fucking flip out. MY DOGS HAVE LEFT THE COMPOUND.

I realized they had been outside for probably a good half hour. This is not abnormal on a nice day, but who knows at what point they decided to break free from the binds of the invisible fence? Was in a half hour ago? They could be in West Hartford by now!

I call Greg. I am freaking out, screaming for the dogs, putting Jane in her crib, and getting my keys. He tells me to drive around. He's an hour away so I'm on my own. I'm driving around the neighborhood like a lunatic, screaming "JIMMY!!!" and "JUNIOR!!!" and shaking a box of bones outside the window. I am praying that I don't see one of them in the road, hit by a car. I go around the block a few times.

I call Greg back. He tells me to keep looking. I'm telling him I'm sure the dogs are gone, and I'm never going to find them, and.....wait a minute....there the dumbasses are, frolicking in one of our neighbors' front yards. Thankfully, it's hard for Junior to go incognito when he's on the loose.

You have to understand - my neighbors do NOT love my dogs. In fact, I'd go so far as to say that about 90% of them hate my dogs. They are mostly quite elderly, and the idea of a 130 lb. dog, who often barks at them when they pass my house, does not strike them as "cute" and "audibly friendly." It strikes them as "deadly" and "motherf***ing scary."

So. I haul my arse out of the car, screaming for the dogs and waving my box of bones, crunching through the snow, which is a foot deep round these parts, and trying to get them to come to me. And even though both dogs "graduated" from dog training school, they don't really use their skills in the outside world. Instead, they oh-so-playfully ran away from me for quite a while.

After lurching around various yards like a complete maniac, I managed to grab Junior. Since Jimmy won't do anything alone, and will follow Junior to the ends of the earth, he followed us on the long trek up the hill to the house. After I locked them in, I walked back down the hill, got back home, and proceeded to have four or five drinks.

Ha, ha! No, I didn't. But I sure wanted to. Instead, I had to attend to my screaming, miserable baby, who realized that she is forever entrusted in the care of a lady who can't even control her dogs.

rockin' Saturday night at my house 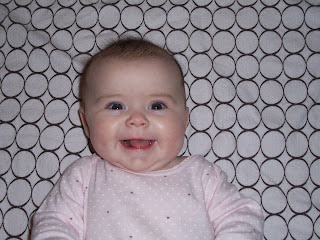 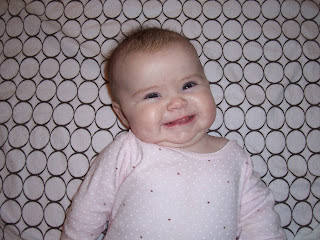 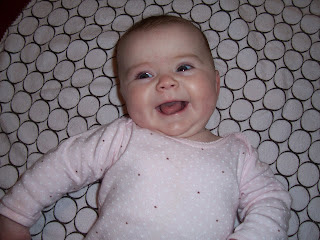 no wonder it takes me forever to leave for work 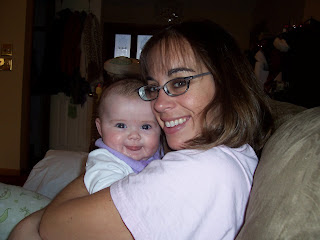 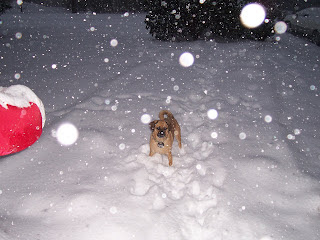 I hate the *(&!*( snow. So if you'd like to read a happy recount of today's weather, I suggest you bounce over to Lisa's blog and see what she has to say. As for me, I can't stand it. We pushed our work potluck holiday lunch an hour earlier (yeah, I can eat heavy holiday food at 11 a.m. if need be) but the roads were still horrendous when I got out at noon. It took me three and a half hours to get home in my sled (I mean, Honda), and all the while I watched car after car slide, spin, and stop. It was one of the most hair-raising commutes of my 34-year-life here in CT.

Stupid snow. On the flip side, it's supposed to be 62 and sunny tomorrow in SD.
Posted by Amanda at 5:09 PM 2 comments: 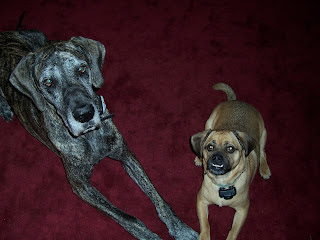 The boys were on the receiving end of some fancy treats from my Secret Santa.
Posted by Amanda at 1:56 PM 1 comment:

I have had, how you say, a shitty week. Just not good.

Until I saw the trailer for this.

Check it out (it's on the site, scroll down).

(And if you think I'm superficial and stupid and whatever, just keep it to yourself. I get four hours of sleep at night. Sorry my idea of culture isn't curling up with Tolstoy.)
Posted by Amanda at 6:42 PM 2 comments: 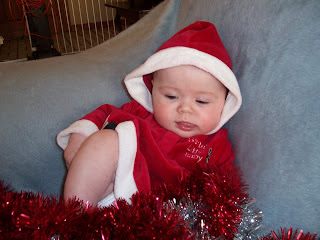 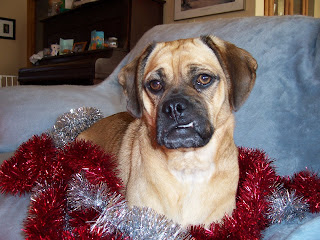 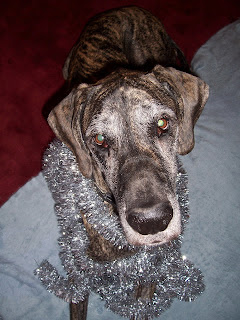 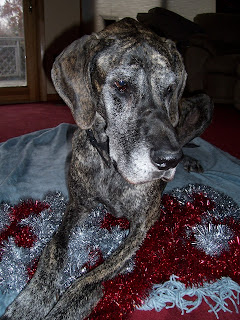 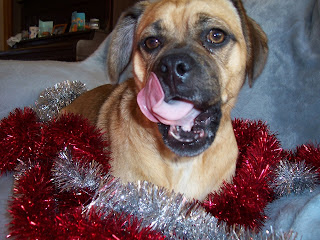 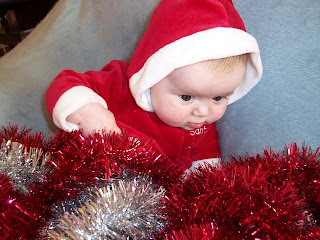