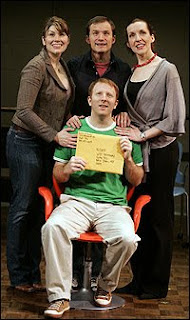 So as previously reported, my number one favorite musical of all time, RENT, is closing on Broadway. It was set to close on June 1, so I went and bought tix for the matinee performance, which would be the 19th time I've seen the show.
And then.
They changed the closing date to September 7! I knew something like this was going to happen. But what to do? I can exchange my tix for a show during closing week in September, but I believe I'm supposed to be in Cape Cod for the bulk of that week, so I will probably just end up going on the now anti-climactic date of June 1. As much as I heart this show, and as much as I'm happy they are squeezing three more months out of it, I admit to being annoyed as well.
BUT THEN.
The most excellent of theater news arrived today, via an email from Alan. I was just about to pop over to playbill.com like the huge theater nerd that I am when I received an email from Alan telling me that my second favorite show of all time, [title of show], was going to Broadway in July! YEAH! I was seriously screaming, people. You'd think I was an investor. I saw the show off-Broadway in September 2006 (pop back to that month in my archives if you want to read about how awesome I thought it was then) right before it closed, begged every theater person I know to go see it in its last weeks, and nobody listened to me. I have now threatened everyone I know that if they don't go see it this time, I'm breaking up with them.
If you have free time, PLEASE visit the [tos] blog on their website. It's hilarious. And join me on April 21 in buying tickets for the show. Or at least tell 9 people (this would make sense if you SEE THE SHOW).
And, in conclusion, SEE [title of show] ASAP.