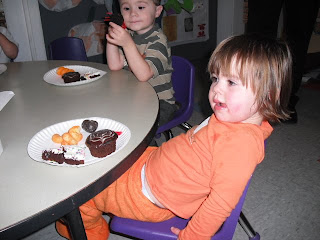 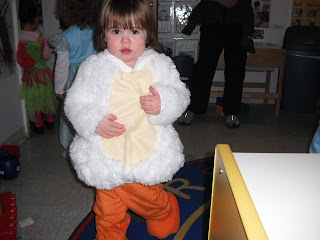 So today is Halloween Eve, and what a day it was. First, I dropped my car off so I could get a new tire. That was a lot of fun. Then at work we had our annual trick or treat extravaganza, which is obviously awesome, because I "organized" it. (I put "organized" in quotes because all it takes is two company-wide emails but for some reason people think it takes more work than that.) (Yes, Dwayne and Shane, I realize you are not among the people who give me credit/think it takes work to organize this festive activity.) Anyway, it resulted in a giant bag of candy, which totally rules.

I left work early to go pick up my car with its spankin' new tire and headed off to Jane's Halloween party at daycare. They somehow managed to wrestle her into her chicken costume, but she ripped off the top pretty quickly, and frankly, I don't blame her. It was a zillion degrees in there already, nevermind with a very warm chicken suit on top of it. We had to go on this costume parade thing throughout the building, and Jane helpfully threw down a massive fit in the middle of it. I accidentally put my keys down so I could try to make her feel better, and oh, did I have a blast later when I had to have my own one-man scavenger hunt to try to find them. Anyway, after the parade there were delicious snacks to be had. Jane was a big fan of that part, and, in fact, she was the last girl standing at the party. Like I said, it was stankin' hot in there, and I really had to escape by the end. But it's nice that they organize this so the parents can come.
More Halloween fun to continue tomorrow - that is, if this hacking cough thing Jane has doesn't turn into something worse. I give it 70/30 in favor of us having to call the doctor tomorrow.

Way cute pictures! (My daughter had that costume for her first Halloween, when she was 10 months old.) I hope your daughter feels better for tomorrow!