Don't wanna be an American Idiot 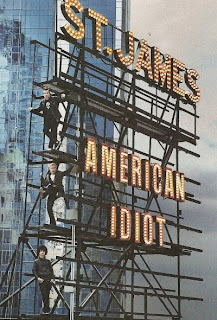 Chaotic is a good word to describe this past week. Like I mentioned earlier, I went to New York last week for a conference. And although I could complain that it was exhausting (which is was) and there were many aspects that weren’t glamorous (very true), I did get to do some cool stuff. Like get to meet Billie Joe Armstrong. You know. From Green Day. Yeah. Him. He was at a post-show party sponsored by American Idiot (the new Broadway show based on the music of, well, Green Day). And I spoke with him. Yes, it was for, like, 10 seconds, BUT STILL. (Also – American Idiot rocked bigbigbigtime.LOVED it. But you have to like Green Day to like this show, because the music is the best part. Also – very very loud.)
Did I mention that there were some celebrity sightings in the audience at that show? Like, half the cast of Glee and George “Norm from Cheers” Wendt? Yeah, that too.
Other highlights – seeing Denzel Washington and Kelsey Grammar speak at two different panel discussions, getting to see Hair and West Side Story, and basically being paid to be in my favorite city in the world.
Lowlights – Jane came down with a double ear infection and (probable) strep throat in my absence. I came home, picked her up at our friends’ house, and had to rush her off to the walk-in clinic because I just knew she had something beyond a cold. Sure enough, after begging my way in (they weren’t talking anymore patients), she got the diagnosis. We actually ended up bringing her to her regular doctor on Friday, because her cough was just getting worse, and they put her on a different antibiotic and steroid for her inflamed throat. Poor bean. Of course now I’m catching whatever she had….but we knew that was going to happen.
We had the first night of auditions for Chicago (the show I am co-directing this summer) last night. Very nice group of talent – and more to come tonight. This one is going to be incredibly tough to cast- but hey, I’ll take an abundance of talent over no talent at all! It looks like we will most likely be rehearsing four nights a week –so things are about to get even busier ‘round these parts.
Luckily, we have a vacation coming up next week. That’s right – we are actually taking our first away-from-home vacation in over three years! Wahoo! We’re only going down to the Connecticut shoreline, but frankly, that’s as exciting as going to Hawaii to me at this point. Even better, because we don’t have to get on a plane. And I am really tiring of the word “staycation.” (Although I think taking a vacation within your own state still qualifies as a “staycation,” but I’m ignoring that.)