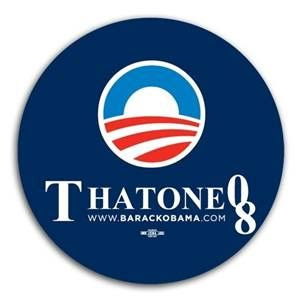 It was Debate Night in America again last night, and once again, I was glued to my TV, simultanously watching the big show while also monitoring various websites and liveblogs covering the event. Although I've always been interested in politics, I find I've become positively obsessed over the past 12 months (as I am sure you have noticed).

My mother demanded that I register to vote the instant I turned 18 – her mantra being, “If you don’t vote, you can’t complain.” I’ve voted in nearly every election since, only missing one or two local elections. And, Lord, have I complained.

As for presidential elections, I’ve voted Clinton, Clinton, Gore, Kerry…and now Obama. I voted for the winner twice, then the loser twice…time for a win again, I say.

Although I do clearly remember screaming in misery during the last presidential election in 2004 when it became clear that Bush had somehow won again – while on my honeymoon in Hawaii (how dare he muck up my escape to paradise!) – I don’t think I’ve ever been as invested in an election as I am this year. When I start thinking about November 4, my heart starts beating faster, with a combination of terror and tentative excitement. If Obama loses, I will cry big, fat, "we have failed" tears.

The other night, my friend remarked the same thing, and said that although she fears that underneath his sheen of hope and change Obama is the same sort of sleazy politician we have all come to detest, she finds herself really wanting to believe that he’s one of the good ones. That the things he says are true. She commented that “this must have been what people felt like about JFK.”

My mom and I are planning our move to Canada, should the voters lose their freaking minds and vote McCain in. Maybe Alan could suggest some nice places to live in yonder Canadia.

Maybe I should just think positively instead.

That Won, is what I've been trying to tell myself.

If I think about things hard enough I actually feel my blood pressure rising. It's either a resounding endorsement of why I never went into politics to begin with, or a signal that if I can't stop thinking about politics, then why am I doing anything but?

I will live in Canadia with Lisa. You and Jane and Greg are welcome to come, just bring the dogs.

I'll start scoping out places for everyone to live. I should become a realtor in Canada for all the interest I'm hearing!