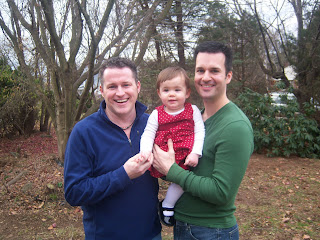 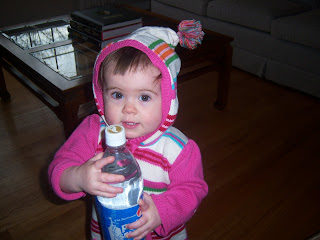 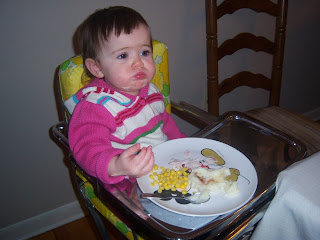 Is it possible that this four day weekend is already over? Bah, humbug.
We had a very nice weekend. Thanksgiving went pretty well. Jane was in such a festive mood that she refused to take an afternoon nap, which really blew by the end of the day, but otherwise it was fun, despite the fact that I didn't win any money during our games of LCR. Do you know this game? Left Right Center? Oh it's great. A monkey could play it (as long as said monkey could roll dice), and there's cash prizes involved. Except it wasn't so great this year, when, like I said, I didn't win.
Friday we decided, very spontaneously, to go to the mall at around 8 a.m. I know this wasn't the 4 a.m. madness that some shoppers thrive on - you know, like those freaks who tramped a Wal-Mart employee to death in Long Island - but still, it was really early. I've never done the Black Friday thing, and truthfully, I had no idea what to expect. I thought a couple of the stores would be open - Macy's and Nordstroms and what not - but not ALL the stores, including, of all things, Sbarros. Who the hell wants pizza at 8 a.m.? I got a little bit of shopping done, but mostly we just enjoyed watching the crowds.
Saturday Todd and Alan came over for the 2008 holiday card photo shoot extravaganza. My asshat dogs were out of control, which was fairly humiliating, but we got some good shots of the three kids (not all together, of course. I don't think that will happen for several years, at least.).
And today was just a laying low kind of day. We saw the first snow of the year, which morphed into rain pretty quickly, thank God. Despite my lifetime in Connecticut, I am no hurry to have the snow piling up. We also did a major purge of one of our bedroom closets. I bid adieu to a ginormous pile of clothes that I finally had to admit would NEVER FIT ME AGAIN, no matter how many miles I log on that *(*&!*(& treadmill. My pre-Jane body days are over, not that they were so great to begin with.
I hope everyone else had a great weekend!
Posted by Amanda at 7:38 PM