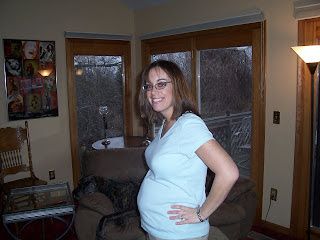 Remember me? Yeah, I'm the one who writes this here blog. I'm sorry I've been so absent - basically, I feel very boring lately and I don't want to put people to sleep with my blog entries.
For those of you who don't get to see me much, you can see by the picture here that I'm actually starting to look pregnant. For a while there I was riding that fine line of "do I look fat or pregnant?" but now I think I've rounded the corner to where strangers will think I'm pregnant. Not that I have anything against being fat, because, well, I've been fat before too, but I've been growing this baby for 21 weeks now, and I want something to show for it! Plus I hear people are nice to pregnant ladies.
You know who wasn't very nice to me? The jackhole who stole all of my CDs out of my car last night. Because I'm an idiot, I didn't lock my car doors. Well, maybe it's the daylight savings time or maybe it's the fact that it was very warm yesterday, but the local morons were obviously out in full force last night. Not only did they steal about 15 CDs, they also stole the box of Frosted Flakes I bought after work to bring into work today (I often like to eat cereal for lunch, mainly because it doesn't make me sick). I lived in not-so-nice sections of New Britain and Hartford, and no one ever touched my car. I move to lovely suburban central Connecticut and this is the second time someone has helped themselves to what was inside.
Can you see Junior in the background of that picture of me, looking so excited about his impending little sister? Don't let his casual stance fool you. While writing this blog entry, I heard him and Jimmy arguing over something in the living room. I went out there and sure enough, they were fighting over an Atomic Fire Ball that Junior took off the kitchen counter, got out of its wrapper, and was proceeding to eat. Luckily I was able to pry it out of his mouth before he really was able to eat much of it, because I can't imagine how one of those candies would feel as it was traveling down the gullet of a Great Dane. Or how that agony would most likely manifest itself all over the rug.
CCSU is playing tonight in the NCAA tournament! Whoo hoo - go, alma mater! I mean, there's not a chance in hell that they'll win, but still. We CCSU alumni have been standing in the shadows of UConn for long enough. And where's the UConn men's team now? Huh? Huh? Yeah, sitting home and watching TiVo like the rest of us, I bet.
Have fun in the snow tomorrow!
Posted by Amanda at 6:28 PM

Aww that is a cute pic. You're definitely looking knocked up! Even more so than you do when I see you every day.

OMG!!! YOU'RE PREGNANT!! I've heard that seeing a pregnant woman somehow makes some strangers think that your belly is in the public domain and they try to touch it. Please, please tell me when a stranger tries to touch your belly - and then you punch them!! :)

You look so CUTE! Pregnant ladies always look good. Even just after puking or having their CDs and breakfast cereal stolen, they still look great! Congratulations.

Post a list of the CDs you're missing, I bet between all of your readers, we could replace them for you.