can you hear me now? 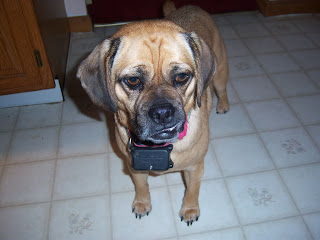 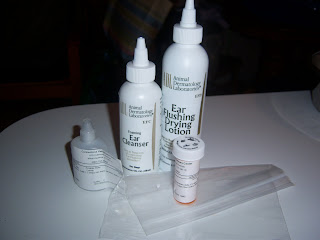 My day today started at 3:30 a.m. Actually, it started before that - I was woken up, on and off, by Jimmy's frantic head shaking. See, Jimmy has chronic ear problems. Because he has floppy ears, he tends to get yeast infections (yeah, that's right) in his ears because of food allergies. And because we are sometimes lazy dog owners, we don't always buy the super expensive food, and we don't always keep up on his ear cleanings, which should take place at least three times a week.
But the thing is, cleaning Jimmy's ears sucks. I used to do it all the time, but since Jane, I have more or less unceremoneously passed on that duty to Greg. But it's gross. Surprising, I know - digging dirt and yuck out of your dog's ears is not the best way to spend your free time.
Which leads us to last night. Greg had cleaned Jimmy's ears before he went to bed, but it did no good. It was too late and it had gotten too bad. Jimmy was shaking and shaking and shaking his head, so much so that we were thinking maybe something was stuck in there. So, many many hours before dawn, Greg decided to take young James to the 24-hour vet to get the situation checked out. I thought we could wait it out; he just wanted to get it over with.
Although I was exhausted, I couldn't go back to sleep. When I started to drift off, either Jane would start wimpering or Junior would start whining to go out. Then I would start thinking about work. I was up for the day before 5 a.m. And the bonus was, Jane decided to sleep until 7:30 a.m. today - WHICH SHE NEVER DOES. This was like, world-record late sleeping for her. The rest of us were up hours before.
Because Jimmy is Jimmy, his triumphant return home featured a slew of medications and a large bill. This is his ear regimin now:


Does anyone want a free dog?
Posted by Amanda at 7:11 PM

I will drop him off tonight.

His tourist camera around his neck cracks me up every time.

I met a girlfriend for Jimmy last night at a wedding I went to. Her name was Emma, she was a puggle with pink toenails and a "couture" dress (as they put it) to match the bridesmaids' dresses. Quite sassy, I think Jimmy would have liked her.