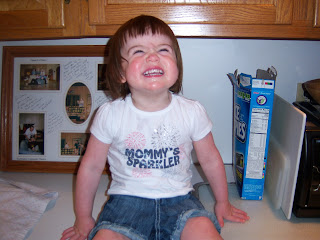 Today is Red, White and Blue Day at daycare
So things are a bit intense 'round these parts. Let me bulletpoint what the next several weeks look like:
*We are hosting a Fourth of July party on Saturday that requires us to remove the remnants of last weekend's ALMOST-PRACTICALLY-SOCLOSE TORNADO EVENT OF THE CENTURY, clean the house, buy stuff to eat, try to not to kill each other and celebrate all of the joyousness of the U.S. of A. I am looking forward to the party - the prep, not so much. Oh, also? We are all sick.
*I am two weeks away from my show, which means in the next week, we have to block any scenes we have missed so far (hint: there are a bunch) and then make the show so its running time is not six-and-a-half days long. Next weekend begins the much-anticipated and always Xanax-necessary Hell Week, when we move the show to the acutal auditorium where we will be performing and everything goes to shit. We will rehearse for many long hours every night the week of the 12th, and then that weekend is the show. And then I collapse and die in a blaze of glory.
*If I don't collapse and die, then Jane's birthday is looming, and preparations must begin for her SECOND BIRTHDAY BLOWOUT EXTRAVAGANZA the weekend of the 25th. Everyone keeps asking me what the theme of her birthday is. I don't know, how about, um, "Jane is Two"? Does that work?
Have a great holiday and don't blow your hands off with any fireworks! Rumor has it Noah and his ark might be able to dock this weekend because the weather is supposed to be OK - ha! - I'll believe it when I see it.
Posted by Amanda at 7:39 AM

I just saw the forecast and did a happy dance for you! It'll be the most beautiful day of the weekend!

Do you need tree-removal help? Seriously. I have a handy, chain saw-wielding, tree-cutting husband who would be more than happy to help (in exchange for a certain motorcycle... just kidding). Really, if you need help, call me.

We just went to a two-year-old's party and it was basically "P is two" as the theme. The kids ran around at the park, there were snacks and cupcakes, and then summer-themed favors like sidewalk chalk and bubbles. I thought it was a great party and everyone had a good time! The birthday girl seemed very happy. So I say theme-less is a good way to go.