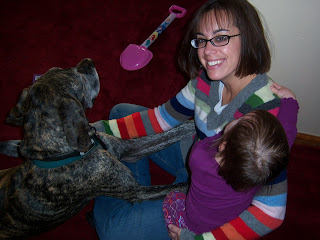 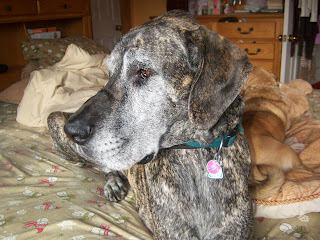 OK guys, I promise no more post titles that scare you! I just wanted to give a quick update on Junior. We had a chance to see him today (we saw him yesterday as well, but he was still pretty drugged and not really responsive). He was walking around but very shaking and antsy and panting a lot - and his whole underbelly is stitched and awful-looking and swollen - but that said, at this point (knock on wood, etc) he is doing well, considering all he has been through. Catching it as early as we did helped a lot. He still isn't eating anything much, but they said that it could very well be a result of the narcotics he's on. As I said on Facebook, between his hot mess looks and his jumpiness from the painkillers, he's very Lindsay Lohan-esque right now.

The current plan is for him to come home tomorrow, unless the doctor changes his mind. OF COURSE Greg is going to a Red Sox game tomorrow so I may have to bring him home myself -and I'm a bit nervous about this considering he weighs almost as much as I do, and when he's not able to move around well, it's truly like helping another human move around - another human who is very stitched up and ouchy and drunk. Plus, Jane gets very jealous when I pet Junior (they are like siblings, I swear) so she's going to be unhappy that he's going to be getting all o the attention, and Jimmy....well, Jimmy has had it rough because he misses his buddy and is totally freaking out if we leave him alone, so he had to go to work with Greg today. So I will also have to prevent Jimmy from jumping on Junior...oh, the good times will roll when Junior makes his triumphant return to the household.
Despite what is sure to be a chaotic and nerve-wracking experience, I'm just so incredibly grateful that he will return (CONTINUING TO KNOCK ON WOOD) and, the more I think about it, the more I feel so lucky that we still have him. I try not to think about how close we came to not.
Thank you to everyone who has been so nice and supportive and understanding - but hey, look at the title of my blog. You knew when you started reading that I was a bit of a dog person. Just a little. But seriously, thank you so much.
Posted by Amanda at 8:37 PM

Yay Junior! Happy wood-knocking is going on over here, too! Fingers crossed for a speedy recovery.

Please call me if you need help hoisting the large patient into and out of the car. Please. I am not doing anything tomorrow and I want to help.

If I could help you with the transfer home I would. So wonderful to find you, a fellow K-9 lover :)