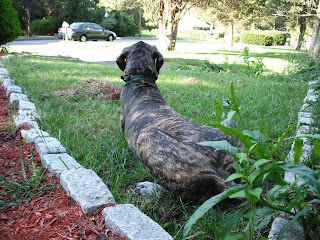 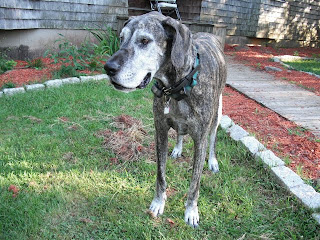 When Greg and I decided to get Junior, we weren't even engaged yet. We had just come off a year of trying very much to make us work - and things were looking good. But when he started talk of getting a dog, I wanted to make sure we were solid. There was no turning back. Because I knew once a puppy was in the picture, I was in it, for keeps. Junior was really our first born. The Number One Pup of All Time. That's what we've called him from the start.
***
After we got Junior, as an 18-pound 8-week-old puppy, we took him everywhere we went. He was the star of our Christmas cards, my Snapfish albums, my blogs. I used to carry him around when he was a puppy, and people always commented on how big his paws were, and how huge he was going to get. "Yes, he is," I said proudly. As if I had something to do with it. Anytime we go anywhere at all, Junior is the star of the show. People come up to him like he's a celebrity. Junior was, and still is, our first born. That just the place he naturally takes in our family.
***
One early November morning, Greg and I were getting ready to go to New York for the weekend. Junior was about 4 months old. Greg called me into the room and said that Junior had grabbed something of mine. I was so annoyed- with Junior, for once again chewing up something I loved, and Greg, for not saving whatever it was from Junior. So I pried Junior's ever-growing mouth open and retrieved a little black box. I didn't recognize it. Inside was my engagement ring. Junior played a very important role that day - and I wouldn't have wanted to get engaged any other way. I clearly remember weeping the morning we left for our two-week honeymoon to Hawaii. I missed him so much when we were gone.
***
During the summer of 2007, when Jane was born, I was up 24/7 - and my dogs stayed right by my side. Up all night, pacing back and forth with a crying, colicky baby, the dogs would hang out with me, wanting so badly to fall asleep, but keeping their eyes half open - not sure why it STILL wasn't time to go to bed yet. During many a crying jag by Jane, my weary eyes would meet Junior's across the room - an unspoken "Is she SERIOUSLY still crying?" passing between us.
***
Greg and I came home from Chicago yesterday, and picked up Junior and Jimmy from their three-day stay at doggy day care. Greg noticed that Junior hadn't eaten that much. Throughout the night (we realized in retrospect), he gorged on food and water. I let him out around 9 and when I went to get him back in, I noticed he was strangely gagging and hacking up a lot of foam. He was acting very strange. I mentioned it to Greg. Greg remembered that this is a sign of bloat, and called our vet tech friend. She told us to bring him in asap to the 24-hour emergency vet, so Greg took him and I stayed home with Jane.
I have to admit I didn't really think anything was wrong. We have brought Junior to the same emergency vet several times with digestive issues -and it was never a big deal. So I was shocked when Greg called to tell me that Junior had bloat, and needed to have surgery right away. And when he said he needed to talk to the vet to find out what Junior's chances of survival were, I was shocked out of my stupor and knew I had to be there. For my pup.
Bloat is a very serious thing that sometimes happens to big dogs, and if it's not treated quickly, they can die. From the moment we got Junior, we were told to watch out for bloat, and were told many a horror story about it. Basically their stomach flips around and gets twisted. The surgery un-twists it and then staples it - somehow - so it doesn't happen again. If you want to know more, Google it. I'm not going to - because I don't want to know more right now.
Our vet tech friend's husband was so great, and came over right away so I could go to the emergency vet. The surgeon showed up at the same time, and they started surgery. We were told that if everything was OK (no stomach damage, other organ damage, etc) that the success rate was about 80%. If there was stomach damage, it went to 50/50. And downhill from there. An hour and a half crawled by. No one was else was there but us - it was well after midnight at this point. I made a million promises to God and everyone else. I heard someone being paged to surgery, and my heart stopped. I heard weird beeping. My heart stopped again. Finally the doctor came out.
Junior was OK.
No permanent stomach damage or organ damage. They were working on waking him up. Now they needed to monitor him to see if any heart arrythmia (sp?) developed, which happens in 2/3 of dogs who have this surgery. But typically it works itself out. Plus he had all of the other recovering to do. He will be at the vet for 2-3 days, longer if the arrythmias (sp? too tired to look it up) crop up. But he should be OK. They are telling us that he should be OK.
People will read this and think I'm stupid for caring so much about a dog. Those people can eff off. He's my best friend. He has been there for the past 6 years of my life, very very important years. Junior, Greg and I were a little family for so long - and I'm just not ready for that part of my family to be gone. Not that I ever will.
But definitely not now.

Make a list of the people who think it's stupid to care about your dog that much and I will personally go and punch them all in the face.

I'm so glad Junior is OK but HOLY HELL your [dog, singular] title scared me. I had to zip to the end of the post to read "Junior is OK" before I could read the whole thing.

I wish Junior a speedy recovery. You are so lucky to have such a gentle soul living in your house. Hugs to all.

Oh my gosh...I thought I was going to burst into tears through this whole blog post. I'm so SO happy to hear that Junior is ok. I'm with Lisa - you make the list of folks who wouldn't understand such a deep connection with a dog and I'll personally kick each and every one of them in the shins (since Lisa is already taking care of the "punch them all in the face" part). My thoughts are with you...AND your pup.

Tears are almost falling in my eyes after reading your blog post. Thanks God your dog is now okay. I hope he will have a long life.

I'd never seen a dog like our Wendel before. Until I saw this picture of your pup. Yours is a bit more gray, but the two look like brothers.

I am SO glad your Junior is ok.

I completely understand your love for him and all of the joy he has brought to your lives and will gladly continue to do.

Your husband is such a sweetheart for proposing in such a meaningful way :) I think I would have said yes and then bawled!!

Hoping he recovers swiftly from surgery and is home very soon.

I just started reading your blog, my boyfriend had a great dane that died of bloat, so now with "Pearl" we are all very cautious. Im so happy to hear Junior is okay, and I to am an animal lover. They are members of our families, we love them like children and so I understand completly how you feel.
Nice blog by the way, I will keep on reading:)