the triumphant return of Junior 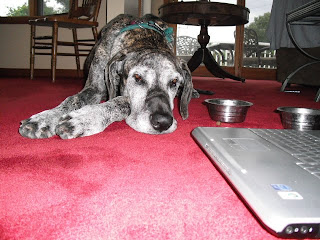 Wow, I'm really earning the name of this blog these days, right?
Junior made his triumphant return home yesterday, with a bag full of drugs, not to mention two narcotics patches on his belly. Yesterday he was all kinds of weak and pathetic - whining if I walked away from him, so much so that I worked from home in the afternoon sitting on the floor behind the couch, because that's where he set up camp - but today he's definitely showing sparks of his old self. Like when he tried to eat Jane's bagel. And her eggs. And my salad. Not so fast, stomach-stapled dog. Not so fast.
Despite his attempt at food thievery, he's still not really eating a lot, and he's sleeping a ton, and he won't have freedom in the yard for several weeks. It will take a total of 4-6 weeks for full recovery. It's back to leash walking for Junior - something he hasn't really experienced since he was about a year old. He also can't roughhouse with Jimmy (much to Jimmy's chagrin) and we now have to mix his dry food with water to make it nice and mushy. Speaking of his food, I found out something very interesting from the vet yesterday. Apparently we should not elevate his food when we feed him, because there is some research that indicates that elevating his food promotes bloat. Um, well, Junior's food has been elevated from day one because we were told that that would help PREVENT bloat. Nope, said the doc. Over the past five years or so, they have been finding differently. Um, nice for someone to tell me. So take note, people with big dogs - don't elevate the food. Not that that's necessarily what caused it, but I would do ANYTHING to prevent it.
He's on a complicated regimen of four prescriptions plus the aforementioned narcotics patches -which we have to take off with GLOVES and flush down the toilet immediately, because it's a human dose and while being high as a kite sort of sounds tempting, I more suspect that Jimmy and/or Jane will get their mitts on the patch if we don't get rid of it immediately (NO, I am not really contemplating bogarting my dogs drugs.) (Of course, it depends on how the rest of this week goes.)
Hey! Speaking of this week, I have yet another cold, and PINK EYE. WTF is up with that? So, to review: I've got my stomach issues, a cold, and pink eye. And very little sleep. And extra stress about my dog. Did I mention today was picture day at daycare? Lots going on. LOTS.
But a very bright highlight in my week is sitting right next to me right now, staring at my pretzels. Not so fast, Junior.
Posted by Amanda at 6:06 PM

So now that you're walking him on a leash, I expect to hear that you've got strep, pink eye, an ulcer, AND a dislocated shoulder. Oh, also the plague.

I wish health and a speedy recovery to everyone in the house!

Glad to hear he is once again home and healing.

Hope you are feeling better very soon too!