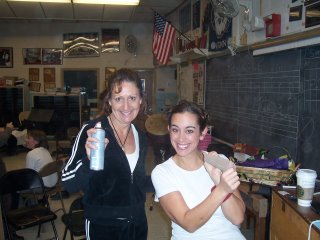 So that about wraps up that for Life with Father. I have to finish up some ad budget stuff and pass that over to the producer, but the show is DONE. Thank God. After Friday's drama with the almost passing out, I was kinda scared on Saturday, because the cold had only progressed. I did have a bit of a coughing fit at the beginning, but nothing too bad. We did the show, struck the set, had the cast party, and I was home by 2 a.m. Sunday I woke up feeling like total and utter hell, as the cold had taken up residence in my sinuses, which is where it remains today. I went into work this morning, but came home early because I think Beth and Flannery had just about had it with my coughing and sniffling. Not that I blame them, because, seriously....gross.

I am proud to report that after three days on the couch (minus show time) I have officially caught up on all of my TiVo. It makes me a little sad, because now I will have to watch TV like regular people. Weird.

Anywho, here's a pic from my show. This is one of my castmates Regina who very nicely helped me pin up my pre-wig hair for the show. The thing that I am holding is my wig cap, although it strongly resembles a knee-high stocking. And that's precisely what it felt like. I will be happy if I never have to put another wig on my head again.
Posted by Amanda at 1:42 PM

So, I have a number in my head. That number represents the number of days it will take you to say that you are bored without having a show to do. I know you say you're happy that it's over and I know that's partly because you've been sick, but I also know there is a number. Anyone want a piece of the action? :)