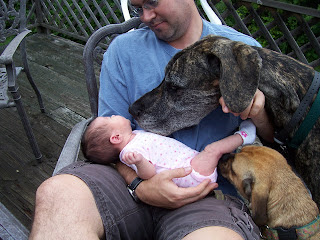 I feel badly, because even though my blog title gives my pups a big shout-out, I haven't really talked about them in a while. I want to make sure that no one thinks they are unloved, now that the baby has arrived. It's really the opposite of that - I have realized that even though I have a very, very large dog and a small, but very very spunky dog, they are far easier to care for than a little human.
Things have been interesting since we added the newest member of our family. The dogs were super-excited when she arrived; since then, they are less interested and maybe a little bit jealous. But seriously, not much. Mostly I think they are happy that I'm around all of the time so they can go outside a lot more, and that we have a lot of visitors, which means more possiblities for snacks and treats from strangers (which doesn't happen, but they haven't given up hope). They are pleased that there are more things for them to rip apart, like one of Jane's stuffed animals and countless spit-up towels. Yesterday I saw Jimmy tooling around with one of Jane's pacifiers in his mouth. This is all exactly what I expected.
I think I know now, more than ever, why dogs are man's (and woman's) best friends. Because they are so undemanding - they just just some attention and an occasional treat, and they are loyal for life. Yeah, I have to admit that I don't have as much time to play with them or as much patience with them as I'd like sometimes, but they are more appreciated than ever. One of my favorite moments this week was when Jimmy crawled into bed with me, and he repositioned himself three times just so he could conform his body just right with mine. What a pup!
Posted by Amanda at 2:41 PM

Aww... Jimmy. They must be thrilled to be able to sleep in bed with you again.

They're good little guys. I wish I had remembered to bring them something when I was there. Although I guess they could have just eaten the mac & cheese if they wanted to!